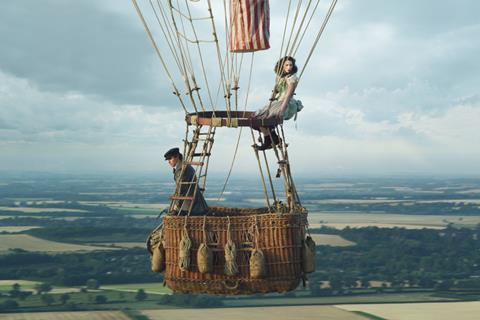 FilmFixer staff were lucky enough to catch a preview of Tom Harper’s high-octane, sky-high adventure film when it premiered at the BFI London Film Festival back in October and we knew right away that the cinema-going masses were in for a treat. Overheard in the FilmFixer office: “I was on the edge of my seat – it was tenser that watching Free Solo.”

Our Aeronauts journey started in August 2018 with a complex shoot in Lambeth. It involved horse-drawn carriages and a highly creative set build, as seen in these photos on London SE1’s website.

From there, we worked with the production again in October 2018 for a large-scale shoot in Camden. Again, this required a total transformation of an area and was to include more horses & carts and set dressing. The production chose Duke’s Road, which is a very attractive street just off of Euston road that boasts a number of beautiful, period buildings. Thanks to the support and patience of local residents and businesses, the shoot was a great success.

The production returned to the same location in January 2019, this time to film a scene involving Eddie Redmayne wandering through the snow. Our Camden Film Officer Juliet McConnell made sure that no stone was left unturned in the run up to this large-scale shoot, which required all manner of prep including streetlight control and traffic management.

Juliet says that “Duke’s Road proved to be the perfect setting for Eddie Redmayne in his top hat! The Locations Team spent a lot of time getting to know local residents and business owners there and as a result were welcomed back a second time. It’s extremely important that productions get to know the local community in advance so they can ensure people’s daily lives are disrupted as little as possible.” With all of the logistics in place, the art department were able to swoop in and successfully transport us back to 1862 once more.

In acknowledgement of the local community’s support over the course of these two shoots, the production made generous donations in Camden to the Woburn Walk Traders Association, Pascal Theatre Company and the Somerton House Residents’ Association. We very much enjoyed hearing from the Somerton House RA’s Chairman that their donation would be going towards maintaining and re-planting their award-winning garden planters (deserving winners of the Camden in Bloom prize in 2018). And from what we’ve seen, their green corner looked equally glorious this summer!